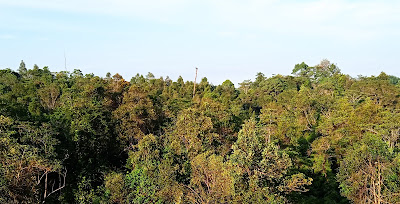 This is a view of the park taken from a northerly location that is from top of a hill.  This view of the park has not been able to be taken earlier because there was no access to the hill previously.  Until of course the northern area of the park was illegally intruded and bulldozed for somebody's oil palm plantation.  The bulldozing was halted and I gave stern warning to the intruder not to venture further into the park area.
The actions of the intruder will be subject to further scrutiny from now onwards.
Posted by Mahmud Yussop at 7:26 AM

Email ThisBlogThis!Share to TwitterShare to FacebookShare to Pinterest
Labels: 2021, Views of the park